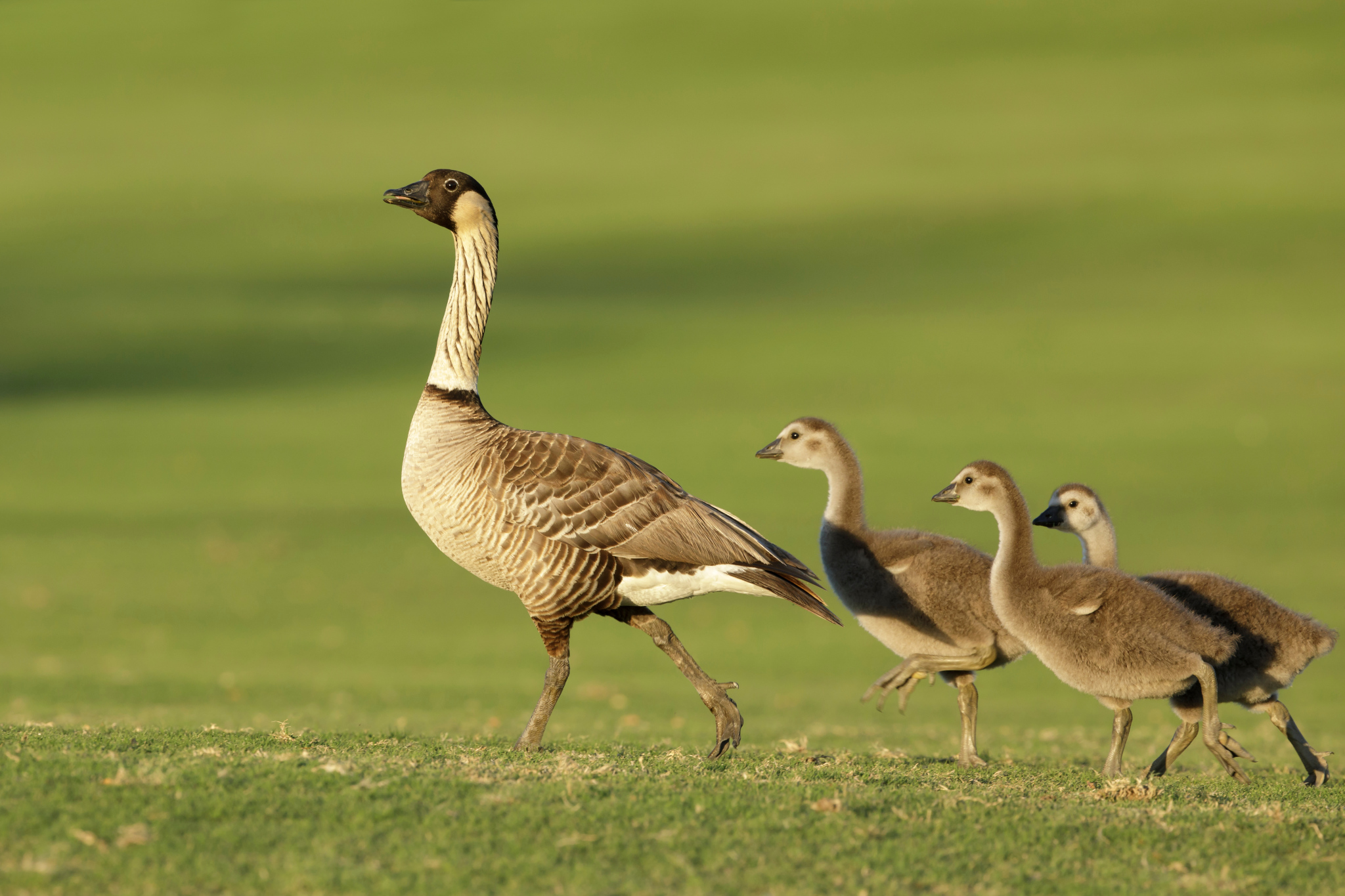 The islands of Hawaii are nirvana for bird watchers. Hawaii’s mild climate, dense forests, staggering sea cliffs and rare mountain landscapes provide a perfect habitat for many species of birds. Over 375 species of birds have been spotted on the islands, many of those are not found anywhere else on earth. The Hawaiian islands attract bird lovers from around the globe as the number of endangered birds that inhabit these islands is higher than any other region on the planet. Your chances of spotting a rare endangered species is pretty good.

The official state bird of Hawaii is the Nene (Branta Sandvicenis). They are native to Hawaii and hold a special place in Hawaiian culture. Nene are mentioned in the Hawaiian creation legends as being guardian spirits of the land. Recently the Nene was removed from the endangered list and is now down listed as threatened under the Endangered species act. In the late 50’s the Nene faced extinction but thanks to protection and successful captive breeding programs the Nene’s numbers in the wild now surpass’s 3000! The Nene is a small goose that can be easily viewed on all the islands.

A variety of dangers contribute to the loss of so many bird species in Hawaii. Large scale agriculture, land development, hunting, predation by introduced species (cats, rats, pigs, frogs, dogs) and mosquito borne illnesses such as avian malaria and pox to name a few. 95 of the 142 native bird species of Hawaii have already become extinct, including many species of honeycreepers including ʻakialoa, mamo, the Hemignathus obscurus, Hawaii OO oho Nobilis, Kauai oo which became extinct in 1987, as well as the Maui ‘Akepa in 1988.

Spotting some of the rarer endangered species in the wild is getting more difficult as the years go on. According to the Audubon Society, only 17 native forest bird species are left in the islands, down from more than 50 only a couple hundred years ago. Only 21 native songbirds remain, 11 of them are listed as endangered. Sadly, numbers like these have given Hawaii the title of bird extinction capital of the world. Thankfully each island has an endangered wildlife refuge, offering a safe haven for native and non native species alike.

On the northern tip of Oahu, the James Campbell National Wildlife Refuge was established for endangered species including the Hawaiian monk seal, Hawaiian Coot and the Black-necked Stilt. This refuge contains one of the largest concentrations of wetland birds in Hawaii. Other birds that you may be lucky to glimpse are the Black-crowned Night-Heron, Hawaiian common moorhen, Pacific Golden-Plover, Wandering Tattler, and Bristle-thighed Curlew. The hills above Honolulu are a reliable spot to catch a glimpse of Oahu’s only native honeycreeper – the Oahu Amakihi, not yet endangered but recently added to the vulnerable list. The coastal valleys of Oahu are home to the endangered Oahu Elepaio. Many hikers report bold and curious behavior from this small flycatcher.

When visiting Maui, be sure to visit Kealia Pond National wildlife refuge. A salt marsh along the south-central coast of Maui, between the towns of Kihei and Māalaea. This is a great spot for birdwatching and admiring Maui’s natural splendor. The U.S. Fish and Wildlife Service acquired the site as habitat for endangered birds like the Hawaiian Coot and Black-necked Stilt. Many other birds can be spotted as well, including but not limited to, the Black Crowned Night Heron, Hawaiian Duck hybrids, Pacific Golden Plover & the White faced Ibis. Nearby, Kanaha Pond State Wildlife Sanctuary features a fishpond that hosts many of the same species as at Kealia. Hosmer Grove in Haleakala National park is home to some of the rarest birds on earth, including several of the elusive Hawaiian creepers such as Scarlet Apapane, I’iwi and Ove Green Amakihi. A few sightings of endangered Akohekohe have been reported here as well.

On the garden island of Kauai, Koke’e State Park is known to be one of the best birding sites on the island, if not all of the islands. Bird watchers have reported sightings of the extremely rare Akekee, Akikiki and Ppuaiohi. Nene also frequents the park along with Kauai Elepaio, Apapane, Iiwi,& Kauai Amakihi. Even catching a sighting of the increasingly scarce Anianiau is still a possibility at Koke’e State Park.

The Kilauea Point National Wildlife Refuge is a fantastic place to observe some incredible marine birds, as well as whales if you’re lucky! In addition to the Nene, it is usually easy to see Laysan Albatross, Wedge-tailed Shearwater, White-tailed Tropicbird, Red-tailed Tropicbird, Great Frigatebird, Brown Booby, and the Red-footed Booby.

Native waterbirds are significantly more common on Kauai than on any other of the islands, thanks to Kauai’s miraculous lack of mongooses. A trip to Kauai almost always includes a close encounter with Hawaii’s state bird, the nene, as well as the calmer Hawaiian Duck.

The Big Island of Hawaii may have the best bird watching of all the islands. Birders the world over come to the Big Island hoping to see three Hawaiian birds in particular: the Akiapolaau – a rare bright yellow honeycreeper, the Nukupuu – an even rarer species of the honeycreeper,and the Alala – the hawaiian crow which was once considered extinct in the wild but has currently been brought back with successful captive breeding programs.

Hakalau Forest National Wildlife Refuge on the eastern slope of Mauna Kea was established solely for forest bird management. It was the first National Wildlife refuge in the country. This forest is a remarkable refuge for not only native birds but plants and animals as well. Regular sightings of the Omao, Hawaiian Elepaio, Apapane, Iiwi, Akiapolaau, Hawaii Creeper and the rich orange Akepa are reported here. Due to its sensitive nature and population of highly endangered species, access to this park is limited. Best to arrange a visit in advance.

Volcano National Park is home to a variety of threatened or endangered endemic birds. This park is an excellent place to spot the Io, the only hawk species native to Hawaii. The Io can often be spotted circling along Mauna Loa Road and above Kilauea’s summit. These Hawaiian Hawks were once on the endangered list but were recently down-listed due to its rising populations on the Big Island. Kipuka Puaulu (Bird Park ) Trail is an old growth, fern-rich trail that is home to some of the rarest plants and animals in Hawaii. Access to this trail is on Mauna Loa Road, its 1.2 mile loop is accessible year round and is good for all hiking skill levels. The Pu’u Pua’i overlook is another popular birding site and you can take Devastation Trail, a 1 mile easy round trip. The endangered Palila are now restricted to an area of forest on the southwestern slope of Mauna Kea.

Thirty-three of the remaining 44 native birds of Hawaii are protected under the Endangered Species Act, with 11 of them having not been seen in decades and being presumed extinct.
The most recent to species to go extinct is the Poouli, a honeycreeper, other species recently declared extinct include:

Native/Endemic birds that are listed as endangered are: