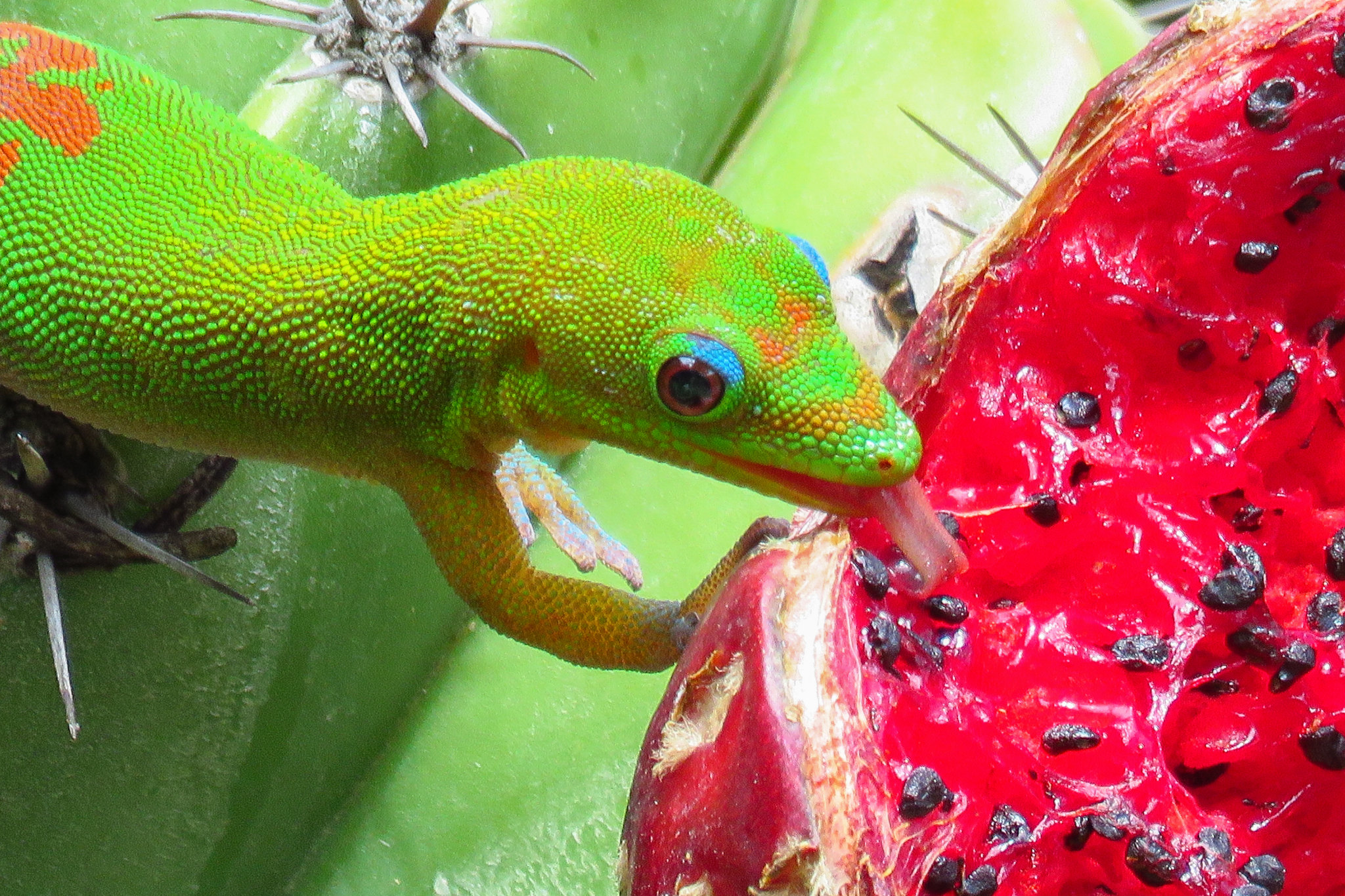 Most Common Reptiles in Hawaii

Hawaii is a warm and tropical destination so you’d think it would be home to a number of reptiles, but it’s really not. Believe it or not, as of today, there are no native land amphibians or reptiles, also known as herptiles, or herps for short.

In fact, the only native reptiles of Hawaii include all the species of sea turtles that can be found in Hawaiian waters as well as the yellow bellied sea snake. All frogs, lizards and snakes that inhabit the islands now are introduced species. Essentially, some ended up here by sheer accident, even the lovely little house geckos.

Reptiles are vertebrates with rough scaly skin that preserves their bodies from drying out. Unlike amphibians, reptiles’ offspring do not go through a larval stage and instead emerge as miniature replicas of the adults.

These scaly creatures are ectotherms, which means they need to be in the sun or at the very least find a warm location, and to cool off they must move to a shaded area. They become lethargic and don’t move around much in cold weather, and some go into a type of hibernation if it’s going to be cold for a long time.

Take a stroll into the wooded areas or around Waikiki if you want to see some lizards. You’ll likely hear them too. Geckos in Hawaii make a chirping sound at night time and may be visible strolling alongside window screens. There are eight different gecko species in Hawaii.

Four different geckos and three different skink species were introduced by the first Polynesian inhabitants. Shortly after World War II, the house gecko was introduced. It encroached on the territory of other geckos and is now thought to be Hawaii’s most common gecko.

They’re great to have around as they take care of pesky mosquitos and spiders. The most popular lizards in Hawaii are the Jackson chameleons, popular because of how much they look like dinosaurs. It’s a fascinating lizard with big beautiful eyes and a sticky tongue that is a lot longer than its body. You can find Anole lizards perched quietly on foliage flowers around populated areas and Skinks can be seen scuttling around the trails in the forests. And again, no lizard ever made it to Hawaii naturally! Scientists believe that some geckos and a few skinks came over with the polynesian voyagers. Today there are over 17 species inhabiting the Hawaiian islands.

The only snake that is native to Hawaii is the Yellow-bellied Sea Snake. It’s the most common snake species on the planet. It typically lives out at sea, in the deep blue ocean waters, but occasionally it drifts into shallow waters when high winds produce strong currents. They are venomous, but to date, no one has reported being bitten by one in Hawaii.

Are there other snakes in Hawai’i? Yes, but there shouldn’t be any at all. Hawaii’s ecosystem is precious and incredibly delicate, so introducing non native snake species could be devastating to the safety of Hawaii’s wildlife. Hawaii is dedicated to protecting its ecosystem, so much so that if someone is found possessing a snake, they are fined $200,000, or may serve up to 3 years in prison! Over the years, people have brought in black market snakes unfortunately, and some escape. Boas, Ball Pythons, Corn snakes, and Garters have been spotted. If you ever come across one, alert the officials if possible right away! They should not be here!

An interesting tidbit about the very common Garter Snakes, found on the mainland in abundance. A few have made it over the years as stowaways on cargo ships full of Christmas Trees from Oregon. Recently, Hawaii Agriculture intentionally imported some brown tree snakes for a specific purpose. The snakes are being utilized to help specially trained dogs detect unwelcomed snakes that could enter the state via passengers or cargo. So these guys serve a purpose, but would otherwise cause complete chaos to the wildlife. Just look at the bird population that they destroyed in Guam when they invaded the island. It was devastating.

There are 7 species of frogs found in Hawaii, none native to the islands of course. Most are relatively harmless to the environment except for the highly invasive Coqui Frog. It lives in the trees, is yellowish to dark brown in color, and has become a huge problem in Hawaii as they have no known natural predators to keep their numbers at bay. In some parts of Hawaii, over 55,000 Coqui frogs are found per hectare. This number poses a very big threat to native insects, and can alter the balance of native ecosystems.

Now let’s talk about Hawaii’s beloved turtles. Everyone loves them and these beautiful creatures play incredibly important roles in the environment and culture of Hawaii’s people. There are 5 species of native sea turtles and 3 freshwater turtles that were introduced. The 5 that are native to Hawaii are the Green Sea turtle (Honu in Hawaiian), Hawksbill, Leatherback, Loggerhead and the Olive Ridley. The Green Sea Turtle (honu), one of the three native species in Hawaii, is the most popular. No matter which island you visit, you’ll be sure to see these majestic giants either basking on the beach, warming up, or popping their head out of the water for a breath of fresh air. Grab your snorkel gear and you’ll likely see them swimming along underwater, so gracefully. What’s really interesting is that adult Honu feed on algae and seagrass, so if you want to spot one, stick close to the coral reefs. But baby turtles, otherwise known as hatchlings, are carnivorous. They eat various mollusks, crustaceans, some jellyfish, seaweed and fish eggs.

There are so many spots on each island to see them, but we’d like to share some of the hot spots.

We must highlight Laniakea Beach though. It’s located on the north shore of Oahu and it’s one the best spots to see these green giants, no question. The turtles are attracted to this rocky cove because it provides a feeding area that consists of kelp and green moss seagrass, which grows on the rocks above and below the ocean’s surface.

As fascinating and gentle as sea turtles are, under federal law, it is illegal to touch them, provoke them, or to get too close to them. It’s crucial that everyone stays at least 10 feet away from them.

Sadly, they were nearly extinct and were placed on the endangered species list.

Fortunately, they have recovered in large numbers and may now be seen swimming in the ocean around the island as well as soaking up the rays on many of Hawaii’s beaches. There are volunteers there, with very big hearts who are members of the non-profit organization called Malama na Honu (Protect the Turtles). These folks have very big hearts and dedicate their time and energy on a daily basis to keeping these beauties safe. They have created safe viewing areas and are available to answer any questions you may have.