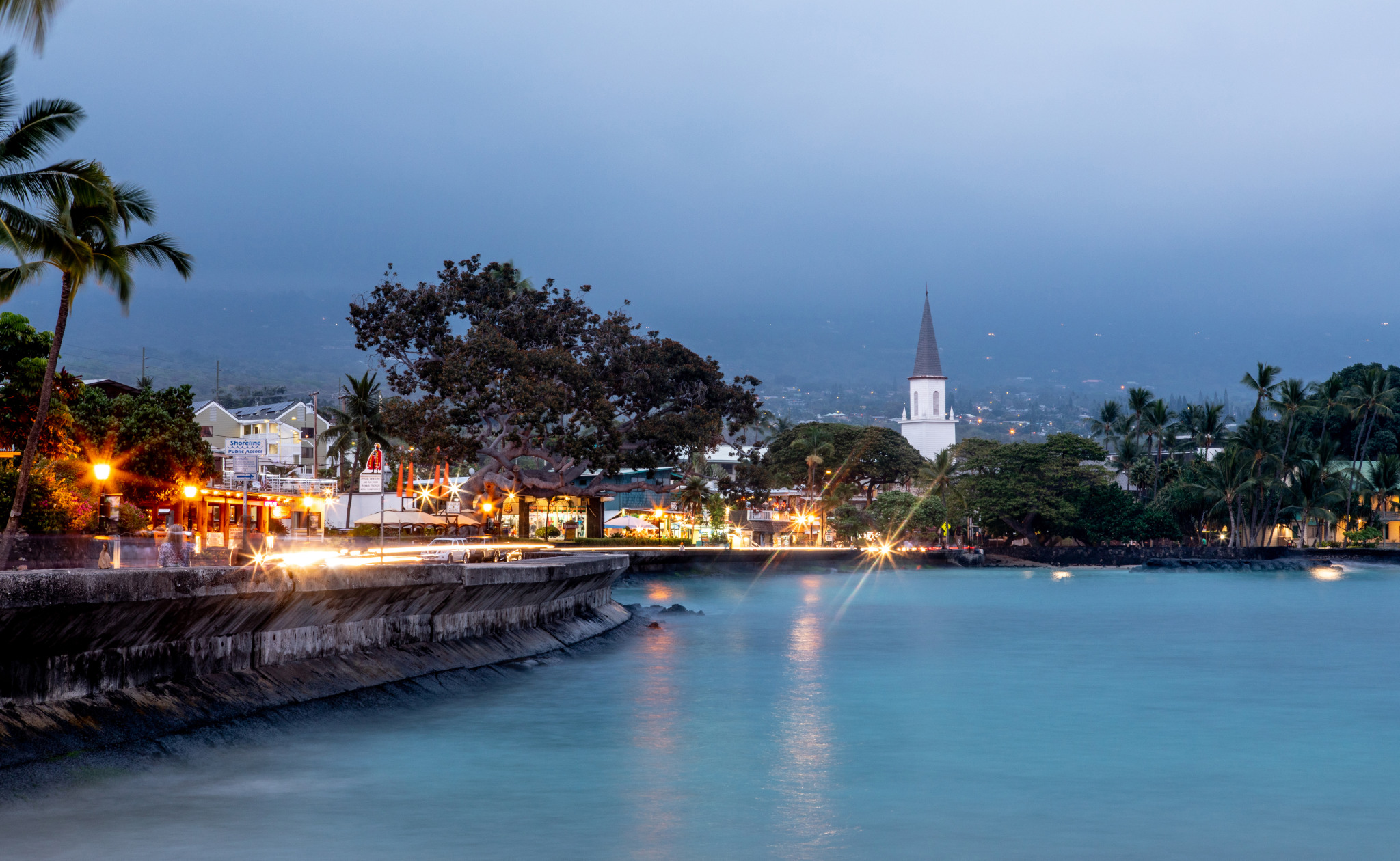 KONA - THE WARM AND SUNNY LEEWARD SIDE

The Kona side of the Big Island is considered dry, sunny and home to most of the island’s beaches. The Kona Coast stretches about 40 miles along the rugged coastline, and contains many historical sites, pristine bays, white sand beaches, and lava fields waiting for you to explore. Booking a Kona car rental during your stay is highly recommended as there are so many things to do and see!

Kailua-Kona is the main town and the heart of the Kona Region and is known as both Kailua and Kona by locals. The community was established by King Kamahameha, and became his seat of government as chief of Kona, before he consolidated rule over all of Hawaii in 1795, and Kona was designated as the capital of the newly unified Kingdom of Hawaii. The capital was later moved to Lahaina on Maui, and then to Honolulu on Oahu, where it remains to this day.

You will find quite an array of ocean-side eateries, shops and grocery stores, and many resorts and condos located along the main waterfront Ali’i Drive. Located 15 miles south of Ellison Onizuka International Airport, this once sleepy fishing village dating back to the early 1800’s, is a destination for comfortable accommodations, shopping, dining, and important historic spots.

Kailua-Kona is the place to explore Hawaiian nightlife, experiencing music, fine dining and spectacular sunsets as you look out over Kailua Bay.

Some of the best snorkeling spots can be found just south of Kona. Fishing is very popular from the shores surrounding town, as well as surfing, paddleboarding, and windsurfing.

This all makes Kona a good central home base to explore the west coast of the Big Island of Hawaii.

CHOOSING A CAR RENTAL FOR KONA

Renting a car on the Big Island is the best way to make the most of your vacation time, and give you the most opportunities to explore and discover all that is offered around Kailua Kona and surrounding areas.

The easiest rental car option is to book with one of the car rental companies directly at the airport location. This way you arrive, immediately claim your Kona rental car from the pickup location and start your vacation. The cost of taxi services could take a large chunk out of your vacation budget if you wish to travel around the island and take advantage of all Hawaii Island has to offer. Bus service exists, but it is not fast, and best serves the needs of the locals.

When booking your car rental in Kona, Hawaii it’s important to consider the size and needs of your traveling group. If the only time you will need a larger vehicle is to get your luggage to and from your accommodations, you might save money by securing a Kona car rental that fits all of your passengers comfortably, and just pack the luggage tightly in the trunk, and in amongst the passengers. This is a short trip, and could save you money. If the price for the smaller vehicle is significant, you might even be able to spring for a taxi to drop off the luggage and still be ahead of the game.

Prices for a car rental in Kona can vary by size of the vehicle. Larger vehicles, like SUVs or minivans may be necessary for some parties, but they can be harder to park, and usually cost more to drive. The goal is to get the best car rental in Kona for the least amount of money, and that is where we can help. At Discount Hawaii Car Rental, we have all sizes and types of vehicles available for your perusal on our website, with added benefits such as free additional drivers, and reduced young driver rates.

Host of the International Billfish Tournament in August every year
An Ironman Triathlon is held in Kailua-Kona every year
The First Capital of the State of Hawaii
Mokuaikaua Church, from the 1800’s is Hawaii’s oldest Christian Church
Kona Coffee is considered to be not just one of the best in the United States, but the entire world!

THINGS TO DO AROUND KONA

Kona Coast State Park
Kekaha Kai – 1,600 acres of pristine blue waters with beautiful sand beaches. Look for the road between 90 and 91 mile markers on Highway 19 on the north side of Kona. Look for the Honu (turtles), who love the warm sandy beaches to sunbathe.

Painted Church
An unassuming white wooden building with sloped green roof. As you walk the floorboard on this 19th century church, you will discover vivid frescos telling various stories from the bible. These were used to teach the spiritual lessons to native Hawaiians. Heading north on Highway 11, near mile marker 104 turn onto highway 160, and travel about a mile to Painted Church Road on your right – and continue on up the hill to the church.

Night Manta Ray Adventure
A magical opportunity to enjoy a sunset cruise, and an opportunity to get up close with feeding and interacting with the ocean creatures under an 18 neon light rate. Includes a tour guide to help with questions and make this adventure worth every penny.

Do I need a rental Car in Kona?

You will need to get from the Kona International Airport (KOA) to your accommodations. If you don’t have a rental car, this will mean a taxi ride upon arrival as well as return date, or a trip on the city bus, or a shuttle if your accommodation provides one. You can walk around the resort area of Kona easily, but if you want to explore any other parts of the Island of Hawaii, you will need transportation.

Why should I book my Kona Rental Car through Discount Hawaii Car Rental?

We have great rates with the major car rental companies located at the Kona Airport, and rental agencies within the town of Kailua-Kona itself. We offer benefits that can include free additional drivers, and reduced young driver rates with some car companies as well. We have great staff that can answer your questions, and help you pick out the right Kona rental car type for your needs.

Should I book my Kona Rental Car before arriving?

The best car rental deals are often found farther out from your pick up date. It is always a great idea to book your car rental in Kona as soon as you have confirmed your flights. Cancelling and rebooking is always free - so renters can book early, and hold that rate. If rates do come down, you can easily rebook on our website, and cancel the existing reservation. This way if rates go up, you already have the best rate locked in, and if they do come down, you can take advantage of rebooking at the lower rate with no penalties or surprising charges to your credit card.

Can I drive around Kona in a day?

Kailua-Kona is a small town and you can certainly drive around town in less than a day, taking in local beaches and parks, shopping at the malls, etc. You can also venture further afield and visit anywhere on the Island if you want to in one day. The Hilo side has lots to offer, and you may wish to take 2 days or longer for a trip around the island, and stay on the Hilo side while taking in the sights and getting to know the various Regions of the Island of Hawaii.